Some articles just make me smile

Confiscated weapons to be melted into rebar
July 26, 2010 | 10:40 am Los Angeles Times
Weapons were on display Monday at Los Angeles County Sheriff's headquarters, where Sheriff Lee Baca announced the destruction of more than 8,300 weapons confiscated from criminals in Los Angeles County. The guns will be converted Tuesday morning into steel rebar as part of "Project Isaiah." Tamco Steel donates its furnace, equipment and personnel to convert the weapons into rebar, and will allocate the steel from the melted weapons to be used forupgrades to freeways and bridges in California, Nevada and Arizona. 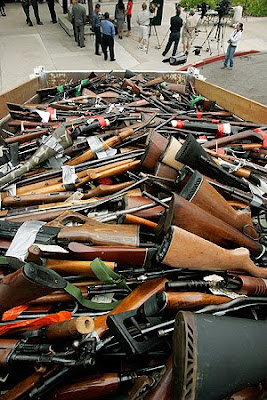