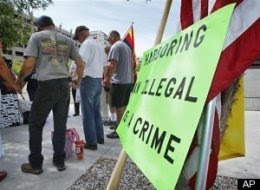 I have heard someone I know and care about who is actually pretty liberal complain about the crime in Phoenix for 20 years. They just recently moved out to avoid it. Yes, people who deal with the problems of illegal immigration have a right to be angry. Wow, can't wait to be attacked for echoing the sentiments of someone who ACTUALLY LIVED WITH IT AND DEALT WITH IT FOR 20 YEARS.
Read the Article at HuffingtonPost

Update Jul 25, 8pm -- Yup, 4 attackers so far...and um... 5 favorited on the comment and a new fan. Oh Jeez, they will probably drop off when they realize that I actually am liberal in most respects. I may sound like a raving right winger when it comes to illegal immigration, but I want the immigration system reformed. The system doesn't work now, not for anyone (except Big Ag) and certainly not for people trying to escape the corrupt oligarchy that is Mexico.
Posted by nunya at 6:06 PM