is a right-wing Bush created Frankenstein nightmare that might end before I die, but I doubt it. 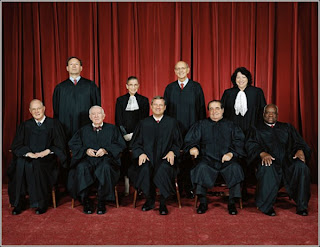 Court: Suspects must say they want to be silent By JESSE J. HOLLAND (AP) – 1 hour ago

WASHINGTON — The Supreme Court ruled Tuesday that suspects must explicitly tell police they want to be silent to invoke Miranda protections during criminal interrogations, a decision one dissenting justice said turns defendants' rights "upside down."

...Justice Sonia Sotomayor, in a dissent longer than the majority opinion, argued that the majority misread precedent and reached beyond the facts of the case to impose a tough new rule against defendants.

So if I'm understanding this correctly, if I ever get arressted and interrrogated I have to open my mouth and tell them I am going to remain silent.

Good thing I've watched enough cop shows and movies to know that I HAVE a right to remain silent and ask for a lawyer, eh?

Anyone else wonder just how far pretzel logic can go in this fucked up world?

The Death of Capitalism
Written by Solomon Comissiong Daily Journal (Opinion), Politics May 31, 2010
Posted by nunya at 9:53 AM